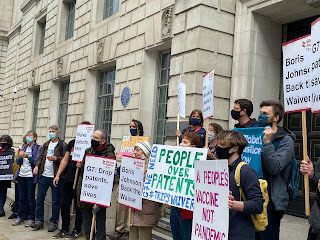 The following guidance explains how we approach licensing COVI-19 related IP to 3rd parties in these exceptional circumstances.

1.   OU and OUI will expedite access to Oxford IP to enable global deployment at scale of associated products and services to address the COVID-19 pandemic

2.   The default approach of the University and OUI regarding (1) will be to offer non-exclusive, royalty-free licences to support free of charge, at-cost or cost + limited margin supply as appropriate, and only for the duration of the pandemic, as defined by the WHO

The team at Oxford University started working on a vaccine  early, very early, in fact, before the problem began. With government  and charitable funding over many years, they had been working on how to quickly deliver a vaccine for an unknown epidemic, Disease X. As the first news reports of an outbreak of viral pneumonia were coming in from Wuhan,  the WHO confirmed on the 9th January 2020, the cause, a novel corona virus. The next day, even before the first reported fatality due to SARS-Cov-2, the scientists at the Jenner Institute of Oxford University had a planning meeting for an eventual vaccine for this  new problem.  Three weeks later the problem became a WHO -Public Health Emergency of International Concern, and that concern about Covid-19  officially became a  Pandemic on the 11th March 2020. So the UK based Oxford vaccine had started, much earlier by two months than an adequate  public health response.  But there was still, as we said last time, a long and uncertain wait.  Perhaps realising  that with 97% public and charitable funding it should give something back  to society,  perhaps inspired by Jonas Salk, the University  pledged a non exclusive, royalty free licencing system;  It  had clearly caught the spirit of the times. Here is their  undated web page in full

Now over a year later we know  that the search for multiple vaccines has borne fruit which exceeded the most optimistic projections. According to the WHO by the 24th May 2021 a total of 1,489,727,128 doses of vaccine have been given, which is amazing. The Astra Zeneca vaccine is especially good for world health as even isolated places, like Bardai, have the necessary normal temperature refrigerator technology required for storage.  Unfortunately the early global solidarity expressed by Oxford University and many political leaders are long forgotten. An exclusive deal was struck for the Oxford Vaccine with Astra Zeneca on 30th April 2020. This has effectively shackled the manufacturing and rollout of the Oxford Vaccine.  Through deals, the details of which have not been published, Astra Zeneca has established manufacturing sites around the world, notably licensing  the Serum Institute of India, and aims to produce 3 billion doses of vaccine this year. This sounds good but firstly vaccines are not being produced as quickly as hoped, leading to undiplomatic wrangles between counties  and secondly the world has nearly 8 billion citizens, and has need of an estimated  14 billion doses of vaccine  for the initial  control the disease. 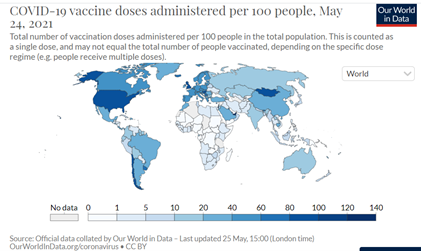 The Astra-Zeneca vaccine is said to be not for profit and should have been equitably distributed through COVAX for at risk populations and health workers around the world according to need. Unfortunately now the primary supplier of the Oxford Vaccine for Africa, is the Serum Institute of India.  It  will be unable to meet its obligations this year  as all of its production is needed to control the epidemic in India.  The Oxford University graph above demonstrates the richest countries are getting most of the worlds doses supplies and this will continue as long as supplies  are limited. For instance the UK has given 61 million doses  for its population of 68 million  compared to 18 million doses for the whole of African population of 1.35 billion people.

Everyone needs urgently  to have access to the vaccine which is why so many people in so many countries led by South Africa and India have been campaigning for a patent waiver and technology transfer similar to that originally  envisaged by Oxford University. Only by massively expanding the number of manufacturers can we right the injustice of having 60% of the total UK  population with a first dose of vaccine where as Africa has only vaccinated 1% of its population.

''There is no diplomatic way to say it: A small group of countries that make and buy the majority of the world's vaccine control the fate of the rest of the world.''

Despite great opposition from the major pharmaceutical companies the Biden- Harris administration has decided that the United States will support the planned patent waiver, saying

The Bill and Melinda Gates Foundation, which has  supported global health an especially  childhood  vaccination over many years was strongly against the waiver but recently changed it's mind and  published,

''No barriers should stand in the way of equitable access to vaccines including intellectual property, which is why we are supportive of a narrow waiver during the pandemic''

Sadly the arguments at the WTO continue and about the only thing the UK and the European Union are capable of agreeing on is their strong opposition to the patent waiver. 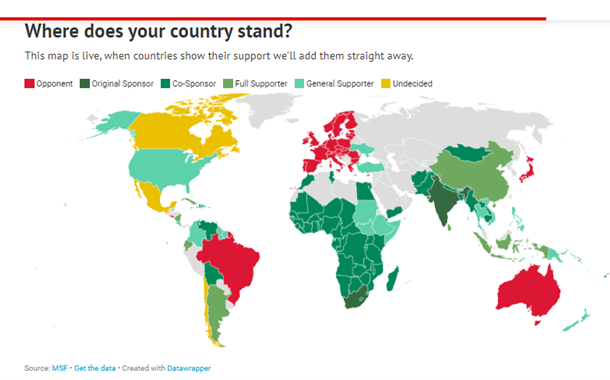 Perhaps you would like to express support for this vaccine waiver which could change the world for the better? As well as considering  sending a donation to India and Nepal why not tackle the problem at the root, by campaigning to increase the production of low cost effective vaccines as requested by South Africa, India, the USA  and a total of 118 of the 164 members of the WTO.

You could petition the Prime Minister it takes a minute of your time or even write to your the Secretary of State for Trade, it takes a little longer but may make a huge difference if we all do it .

Can we  ''act justly, love mercy and walk humbly'' and work for a better world?

Mark and Andrea
Mark and Andrea Hotchkin currently work at Bardai in the north of Chad helping to develop local hospital services. They are hospital doctors and specialise in surgery, emergency medicine and obstetrics & gynaecology. They believe that the world is an unjust place and are working for equality in healthcare.